Michael Jones brought a fascinating twist to the game – he had the physicality and explosive power of a forward, yet the agility, athleticism, speed and skills of a back. He was the total rugby player says STEVE HALE.

Having played the curtain-raiser for Auckland Colts on Saturday the 14th of September 1985, Michael Jones sat back alongside team mates Zinzan Brooke and Bernie McCahill in theLancaster Park stands, interested onlookers as their provincial A team lifted the log off Canterbury in a titanic struggle later billed  ‘The Match of the Century’.

Within 24 hours the dynamic young loose forward had received a phone call from Auckland coach John Hart summoning him to join the senior team’s ranks.

While Jones was not a complete rugby unknown, he had already represented New Zealand at Under 18 level and captained a fearsome Henderson High School 1st XV including Timo Tagaloa his subsequent progression through the ranks to the top level of the game was nonetheless nothing short of incredible.

Within 12 months he had taken out a mortgage on the Auckland No 8 jersey and made his test debut for WesternSamoa fittingly against Wales at Apia. His father Derrick who passed away when Jones was just four years of age had taught in the Islands and was of Welsh heritage. Mother Maina was Samoan and remained a rock in her son’s life until a tragic accident while visiting Kenya in 1997.

Throughout the 1987 NewZealand Barbarians tour of the United Kingdom Jones began to unleash a complete skill repertoire. His left foot chip and chase try which completely be fuddled veteran English fullback Dusty Hare. Future All Black team mates Alan Whetton and Mike Brewer could just shake their heads in disbelief.

Jones was as close to the perfect prototype. Tremendously strong and physical, a punishing defender, who could kick off both feet and pass off both hands and was blessed with a sense of anticipation which ensured he was always on hand to take that last pass or make that bone-jarring spot tackle.

A once in a lifetime player, his highlight reel remains so vivid even to this day, there was no need to dig out the annuals and cross reference any of his feats. He was the first player to score the opening try in two World Cups, not to mention being the first to dot down in the 1987 World Cup final.

I’m still to this day completely fixated by a piece of Jones magic which I observed from the EdenPark terraces as a rampant All Black side demolished the 1988 Welsh tourists.

Jones showed the composure, skill and dexterity to scoop up a mistimed pass and roll the ball round his back while continuing at full speed towards the try line.

Jones played 55 test matches in in a career spanning 13 seasons. He would undoubtedly have added many more internationals to that tally if it hadn’t been the fearful battering his body took in the name of All Blacks rugby.

His career will forever be marked by the horrific knee injury he suffered while trying to secure a loose ball against the Pumas at Athletic Park in 1989. Surgeons later likened the severity of the physical trauma to being in a collision with an oncoming vehicle travelling at 40 kilometres per hour.

Legend has it Jones spent the first night following his knee reconstruction without pain relief. The morning after his severed cruciate ligaments had been reattached, a doctor enquired how Jones had managed his pain levels overnight.

Jones replied that he had pushed the button hanging by his bed as instructed several times and the intense discomfort soon dissipated. Upon closer inspection the doctor couldn’t believe his eyes, the morphine pump had not been attached correctly. Throughout the night Jones' mind had willed his body to overcome levels of pain which must have been close to intolerable.

It took 13 months of intense rehabilitation before Jones was able to return to the playing field, fittingly marking his comeback with a try under the posts against Southland on Eden Park.

A second knee reconstruction redefined his career. Losing much of his spring, footwork and athleticism Jones trained tirelessly, developing a Hulk like physique and switching to the blindside of the scrum. While his amazing ball skills and sense of anticipation remained, Jones completely overhauled his style of play, to become rugby’s version of the designated hitter.

One constant throughout Jones' career however was his refusal to play on the Sabbath. All Blacks coaches Brian Lochore, John Hart and Grizz Wylie happily respected Jones' beliefs even if it meant he was unavailable for several significant test matches during his career including the 1987 and 1991 World Cup semifinals.

Ultimately Jones' stance did cost him selection in Laurie Mains 1995 World Cup Squad. Ironically the AllBlacks sole loss in that tournament, the final, was played on a Saturday.

Jones bowed out of the game asa player in 1999 with a World Cup winner’s medal, back-to-back Super 12 titles and nine successful NPC campaigns to his name, proof that nice guys really can finish first.

Michael Jones had the distinction of being the first try scorer at both the 1987 and 1991 World Cups. 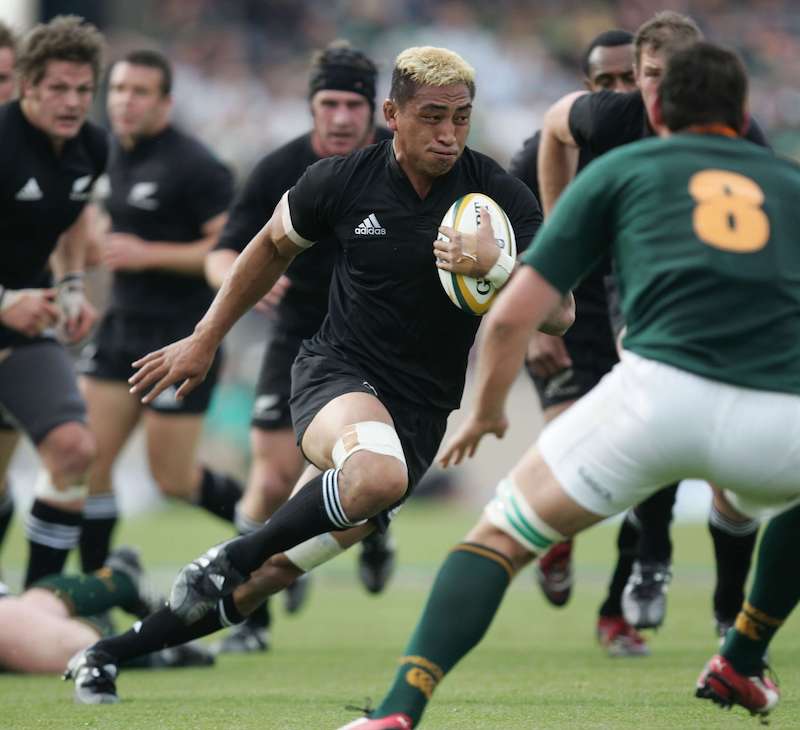 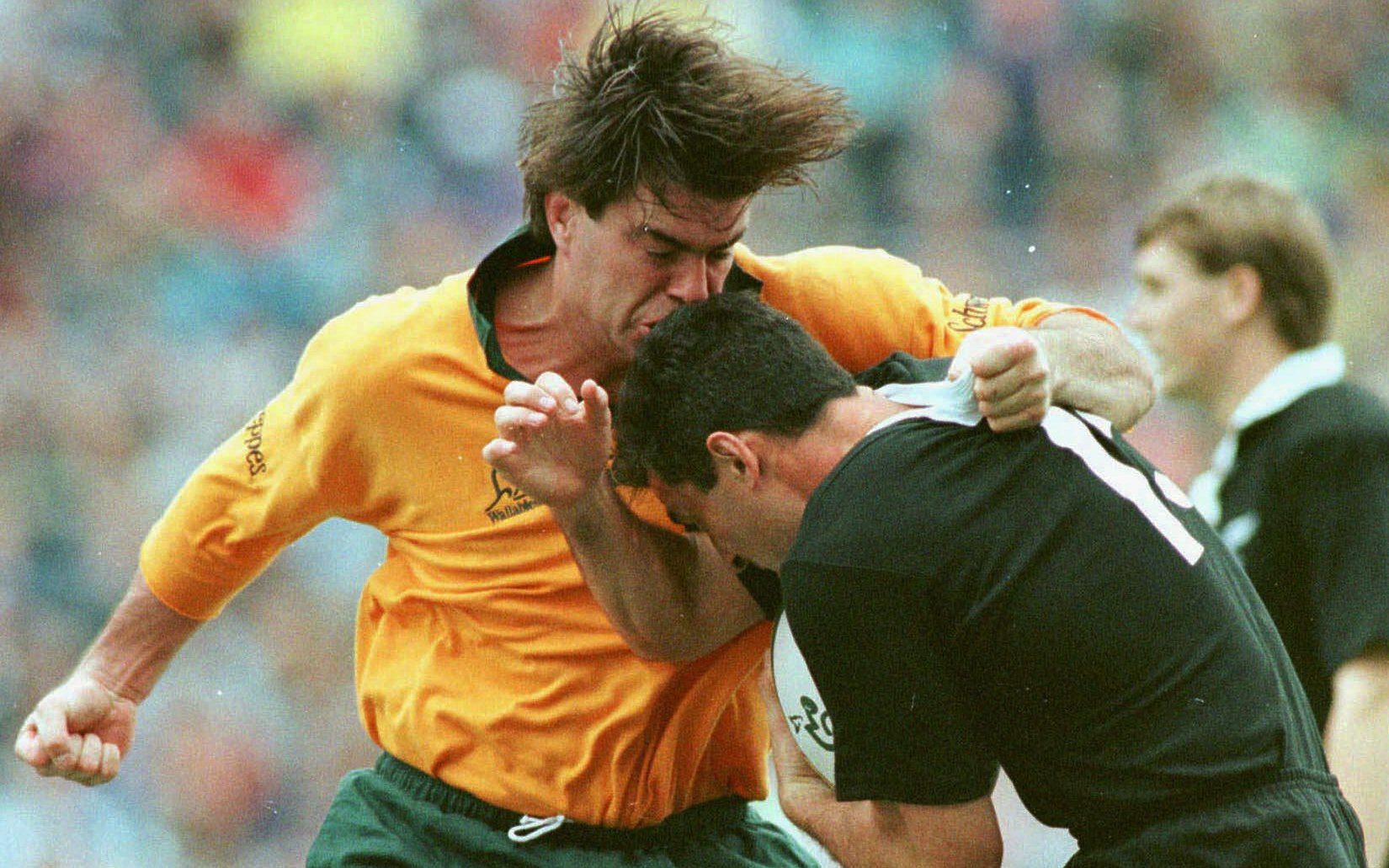 In 1992 All Blacks centre Frank Bunce was lucky to get away with a reckless cleanout at a ruck that forced New South Wales loose forward Michael Brial to leave the field injured. When the two players 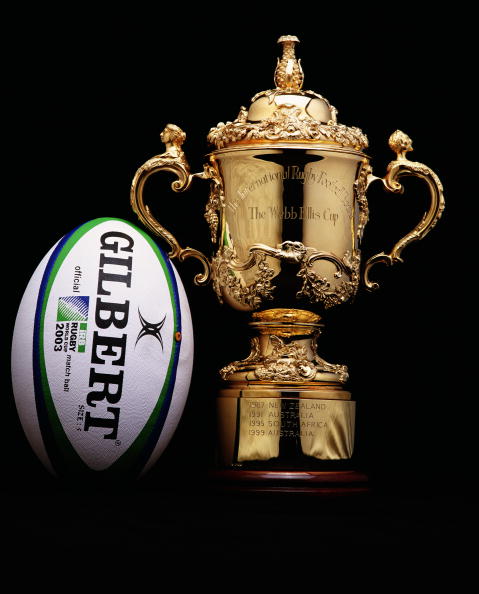 Legend has it that rugby emerged dramatically and suddenly as a new code because one man, William Webb Ellis, picked up the ball during a football match at Rugby School and ran with it. This was the